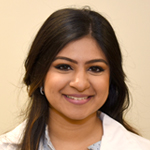 Dr. Ahmed was studying to be a Physician’s Assistant at Drexel University in Philadelphia when she got the opportunity to go to medical school. Dr. Ahmed graduated from Dow International Medical College in Pakistan. Since September 2015, she has been co-CEO and co-managing the Olympic Physical Rehabilitation Practice in Trenton, New Jersey. In 2015, she had a poster presentation accepted to the American Society for Reproductive Medicine Meeting in Boston, Massachusetts. 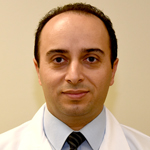 Dr. Ansari received his MD at Isfahan University of Medical Sciences in Iran. During and after graduation from medical school, he worked as a primary care physician and then as a general practitioner at a private office in Iran. Dr. Ansari also worked as an emergency physician in Iran through October 2015, which is when he relocated to the United States.

During his training, Dr. Ansari had several poster presentations accepted to scientific meetings, “Recurrent Pancreaticolithiasis in a Young Patient with Idiopathic Chronic Calcific Pancreatitis” to SHM 2019, and “‘Herald Bleeding’ Secondary to Aortoenteric Fistula in a 56-Year-Old Man” accepted to both ACPNJ 2020 and National ACP 2020.

After his graduation, Dr. Ansari will be working as a Hospitalist and PCP at Kaiser Permanente in Fresno, CA. 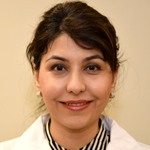 Dr. Farshidi completed her medical training at Mashhad University of Medical Sciences in Iran, graduating in the top 10 percent of her class. After graduating, she completed an MD residency in obstetrics and gynecology at Mashhad and worked as an OB/GYN physician in Iran. After relocating to the United States, she has been working as a research assistant at the LA Biomedical Research Institute at Harbor-UCLA Medical Center. Dr. Farshidi has numerous peer-reviewed articles and abstracts.

Dr. Farshidi had an accepted poster presentation to DDW 2020 titled “Identifying Barriers Among Primary Care Physicians and Providers for Fecal Microbiota Transplantation for Clostridioides Difficile Infection”, which was also chosen as one of the top 3 senior resident research presentations at our 2020 resident graduation ceremony.

Dr. Farshidi will be working as a hospitalist at Corona Regional Medical Center in Corona, CA following her training. 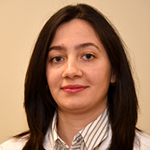 Dr. Harizaj received her degree from the University of Medicine of Tirana in Albania. After graduation, she worked as an internal medicine and general physician in Albania before relocating to the United States. Most recently before her residency, Dr. Harizaj was a research assistant in the Department of Pediatrics, Icahn School of Medicine in New York. She had an abstract accepted to the Journal of Allergy and Clinical Immunology in September 2016.

Dr. Harizaj’s senior resident research project titled “Equity in Hemodialysis: A General Overview” was chosen as one of the top 3 research presentations at our 2020 resident graduation ceremony.

Following her graduation, Dr. Harizaj will continue with the program as its 4th-year Chief Medical Resident/Junior Faculty member for the 2020-21 academic year. 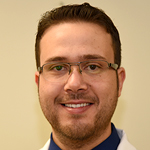 Dr. Ibrahim graduated from the University of Benghazi Faculty of Medicine in Libya. After graduation, he completed a preliminary year in an internal medicine residency before training in a psychiatry residency program. He has conducted several oral presentations at Al-Hawary Medical Center in Benghazi, Libya. After his relocation to the United States, Dr. Ibrahim has held clinical trainee positions in internal medicine, psychiatry, and neurology.

Following his graduation from the program, Dr. Ibrahim will be continuing as an academic hospitalist at Capital Health in NJ. 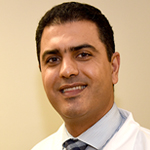 Dr. Jamasian graduated from Yazd Shahid Sadooghi University of Medical Sciences and Health Services in Iran. He worked as a Primary Care Physician in Iran before working as a hospitalist and ER doctor. Dr. Jamasian also spent time as a drug abuse counselor before moving to the United States. Most recently before his training, he has worked as a research fellow at the University of California in Irvine, California. Dr. Jamasian has had several abstract acceptances and publications, as well as poster and oral presentations in both Iran and the United States.

During training, Dr. Jamasian had an accepted poster presentation to SHM 2019 titled “A Rare Case of Moyamoya Disease in African American Female with Sickle Cell Disease”.

Dr. Jamasian will continue his training as a Hospice & Palliative Care Medicine Fellow at UCSF in San Francisco, CA. 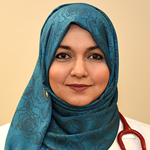 Dr. Merchant graduated from Dow Medical College in Pakistan. During medical school, she worked as a student volunteer for the Patients Welfare Association in Karachi, Pakistan. After graduation, she completed an intern year, then worked as an inpatient and ER registrar/hospitalist in Saudi Arabia before relocating to the United States. Recently before her residency, Dr. Merchant was a clinical research assistant at Rush University Medical Center in Chicago, Illinois.

During her PG3 year, Dr. Merchant had an accepted poster presentation to SHM 2020 titled “Moyamoya Disease: A Rare Cause of Stroke in the Unexpected”.

Following graduation, Dr. Merchant will be continuing in the program as Core Faculty/Clinic Faculty. 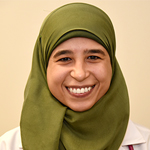 Dr. Mostafa had poster presentations accepted to ACP National 2019, “Dangers of PEG Placement in Morbid Obesity” and to National ACP 2020, “Ethylene Glycol Toxicity Presented as Multiple Sclerosis – Is it Antifreeze or MS Disease?” Dr. Mostafa’s senior research presentation titled “Evaluation of Safety and Impact of Cephalosporin Graded Challenge Program” was also chosen as one of the top 3 research presentations at our 2020 resident graduation ceremony.

Dr. Mostafa is working as a Geriatrics Fellow at the University of Texas Medical Branch in Galveston, TX. 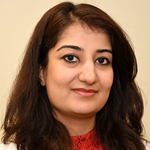 Dr. Nazir graduated from the Hamdard College of Medicine and Dentistry in Pakistan. After graduation from medical school, Dr. Nazir completed an internal medicine residency at Shifa International Hospital in Pakistan, where she was awarded “resident of the year” and worked as a chief resident. After completion of her residency, she worked as a registrar in Pakistan before relocating to the United States.

Dr. Nazir had several poster presentations accepted to scholarly meetings during her residency, titled “Urticarial Vasculitis: A Rare Cause of Episodic Abdominal Symptoms” to NYRIF 2019, “Is it Occam’s Razor or Fixation Bias?” to both SHM 2020 and National ACP 2020, and “Community Outreach Project: Influenza Vaccination Rates” to ACPNJ 2020. Dr. Nazir’s senior research project titled “Evaluation of Safety and Impact of Cephalosporin Graded Challenge Program” was also chosen as one of the top 3 research presentations at our 2020 resident graduation ceremony. 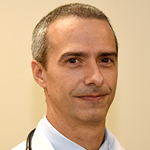 Dr. Perez graduated from Universidad de Ciencias Médicas de la Habana in Cuba with a gold degree certification. Post graduation, Dr. Perez completed a family medicine residency in Cuba, as well as a general surgery residency. Following his residency, Dr. Perez was a general surgery attending at several different hospitals in Cuba. After relocating to the United States, he worked as a surgical recovery coordinator in Florida, as well as a UCI donor management coordinator. Dr. Perez has had several abstracts accepted for publication as well as peer-reviewed book chapters. He has made numerous poster and oral presentations in both Cuba and the United States.

Dr. Perez’s senior research project titled “Equality in Hemodialysis: A General Overview” was chosen as one of the top 3 resident research presentations at our 2020 resident graduation ceremony. 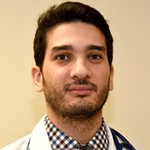 Dr. Saeed received his degree from the University of Baghdad College of Medicine in Iraq. Following his graduation, Dr. Saeed worked as a medical doctor in Iraq. Coming to the United States as a Fulbright scholar, he received his MPH from the University of Kentucky, where he worked as a research assistant following graduation. Dr. Saeed has worked as a teaching assistant and was an instructor in medicine at Washington University School of Medicine in Saint Louis, Missouri before starting his residency training. He has several peer-reviewed articles, as well as poster and oral presentations.

Dr. Najjar had several scholarly abstracts accepted as poster presentations during his training titled “National Acute Kidney Injury Risk Estimates after a Variety of Inpatient Surgeries” to ASN Kidney Week 2018, both “Association of Gout with Vitamin D: A Population-Based Study” and “National Estimates of Pain Medication Use in Patients with Osteoarthritis” accepted to ACR/ARP 2019 Annual Meeting.

Dr. Najjar is working as a Rheumatology Fellow at the University of Washington in Seattle, WA. 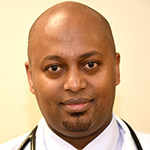 Dr. Tumebo graduated from Addis Ababa University, College of Health Sciences, School of Medicine in Ethiopia. Following his graduation, Dr. Tumebo worked as an attending physician, medical doctor, and lecturer in Ethiopia until he relocated to the United States. Before his residency training, he worked as a medical assistant at University Urgicare in Somerset, New Jersey.

Following graduation, Dr. Tumebo will be continuing with Capital Health as an academic hospitalist. 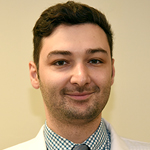 During his PG2 year of training, Dr. Zarkua had an accepted poster presentation accepted to ACPNJ 2019 titled “Refractory Hyperthermia in ICU”.

Dr. Zarkua will be continuing his training as an Infectious Disease Fellow at the Medical College of Georgia in Augusta, GA.