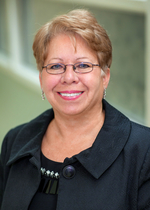 Carmen M. García was a gubernatorial appointee to the New Jersey State Parole Board, serving as an associate board member for 14 years. During her tenure through various administrations, García served as vice-chair of the Decision Making Processes and Procedures Committee, an active member of the Legislative and Regulatory Affairs Committee, and as the executive branch representative on the State Council of the Interstate Commission for Juveniles. She has previously served Capital Health as Secretary, Capital Health System Hospital Board of Directors.

García is a former Chief Judge of the Municipal Court for the Capital City of Trenton in New Jersey. She served with distinction as a municipal jurist for 16 years. During that time, she developed and administered New Jersey’s first Municipal Drug Court Program, which provided diversionary treatment to first-time offenders. García was the first Hispanic appointed to the bench in Mercer County and the second Latina ever appointed to the bench in the State of New Jersey.

Though retired from State service, García is a recognized community leader who remains actively involved in numerous professional, civic and volunteer associations and activities.