Lung cancer is a highly prevalent disease; in 2005 there were an estimated 173,000 new cases in the U.S. alone, with 164,000 deaths. Lung cancer is the leading cause of cancer death in the United States for both men and women, exceeding the combined total deaths from colon, breast, and prostate cancers (the second, third and fourth leading killers). Only 16% of patients present with early or resectable disease that can be treated with curative intent; of these half will survive for five years. Primary surgical resection is the preferred treatment for early stage NSCLC for those patients that can tolerate surgery. For those patients who are medically inoperable, external beam radiotherapy (EBRT), stereotactic body radiotherapy (SBRT) and stereotactic radiosurgery (SRS) are treatment alternatives. Advanced stages of NSCLC are treated by surgery, SRS, SBRT, EBRT, chemotherapy, or a combination of these treatments depending on the extent of disease, the size of the tumor, and the presence of metastasis.

Using the CyberKnife® System to treat lung cancer:
Guidelines for CyberKnife® treatment were based on prior experiences with SBRT in the treatment of patients with medically inoperable NSCLC and those with NSCLC who refused surgery.

The CyberKnife® System is unique in the world of SBRT thanks to its Synchrony® Respiratory Tracking System, which tracks and compensates for tumor movement during treatment delivery. This system was used in a study in which 23 patients received 15 Gy in a single session. There were no grade 3 or higher radiosurgery-related complications. The early tumor response was complete in 2 patients, partial in 15 and stable in 4, with two cases of progressive disease noted. 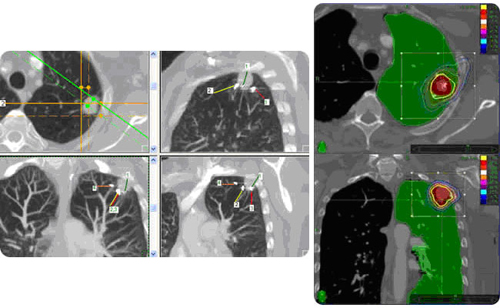