When considering surgical treatment options, many patients have concerns about safety. In particular, patients question whether da Vinci ® surgery is as safe as traditional methods. 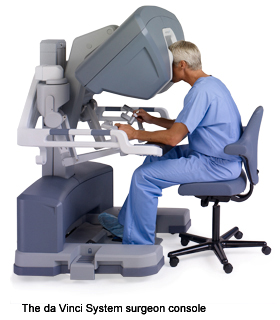 With da Vinci® Surgery, as with traditional methods, you are under the care of at least two medical professionals: Your surgeon as well as his or her supporting team. Your surgeon requires at least one assistant at your side during surgery. This team-member assists with tasks, such as switching between instruments, to provide your surgeon with the optimal da Vinci® instrument for the procedure step being performed.

Just a few feet away, your surgeon operates using the console controls. As your surgeon maneuvers the controls, da Vinci® scales, filters and translates his or her wrist and finger movements into precise movements of miniaturized instruments at the patient-side cart. Tremor reduction minimizes unintended movements, which means that da Vinci® instruments can move in a more precise manner than a human hand.

And because the da Vinci® patient cart does the work of holding and repositioning the instruments and camera – and because your surgeon operates while seated – surgeons can experience much less fatigue in performing surgery with the da Vinci® System.

Finally, during the course of an operation, the da Vinci® System will perform millions of safety self-checks. The System is designed to be fail-safe, which means that in the event of power interruption or a safety-check failure, the System is designed to shut down safely, allowing the surgeon to remain in control of the procedure.

While clinical studies support the effectiveness of the da Vinci® System when used in minimally invasive surgery, individual results may vary. Surgery with the da Vinci® Surgical System may not be appropriate for every individual. Always ask your doctor about all treatment options, as well as their risks and benefits.

Capital Health Medical Group recently launched Capital Health – Virtual Primary Care, a virtual practice that offers telehealth services to individuals in New Jersey and Pennsylvania (ages 16 and older) who wish to receive support in managing health issues from the comfort of their own home.

Dr. Charles Polotti recently joined Capital Health – Urology Specialists, a team of skilled physicians and other medical providers who are highly trained in diagnosing and treating issues related to the urinary tract and men's health issues.

Dr. Cecilia Perez – a board certified family medicine physician – is now seeing patients at Capital Health Primary Care – Hopewell. Fluent in English and Spanish, Dr. Perez is skilled in providing care for patients of all ages. She is experienced in osteopathic medicine, which includes diagnosis and adjustments to the musculoskeletal system.