Lung cancer is a disease of uncontrolled cell growth in the tissues of the lung. This growth may lead to metastasis, which can invade adjacent tissue and spread beyond the lungs.

The vast majority of primary lung cancers are carcinomas of the lung, malignant tumors that grow from epithelial cells lining the bronchiole tubes or alveolar sacs that are an important part of oxygen exchange in the blood stream. For this reason, lung cancers originating from the bronchioles are sometimes called bronchogenic carcinomas or bronchogenic cancers. Cancers can also arise from the pleura (the thin layer of tissue that surrounds the lungs) or rarely from supporting tissues within the lungs, for example, blood vessels. These are called mesotheliomas. One of the primary causes of lung cancer is smoking, but lung cancer can also be caused by inhalation of second hand smoke, asbestos fibers, radon gas, genetics, and air pollution. 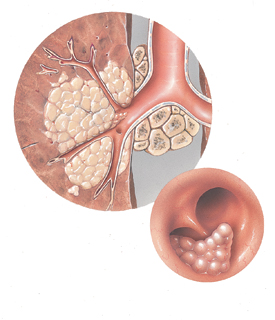 Since lung cancer tends to spread or metastasize very early in its course, it is a very life-threatening cancer and one of the most difficult cancers to treat. While lung cancer can spread to any organ in the body, certain organs – particularly the adrenal glands, liver, brain, and bone – are the most common sites for lung-cancer. The lung is also a very common site for metastasis to spread from primary tumors in other parts of the body. Tumor metastases are made up of the same type of cells as the original (or primary) tumor. For example, if prostate cancer spreads via the bloodstream to the lungs, it is metastatic prostate cancer in the lung and is not lung cancer.

On a sunny June afternoon, a 59-year-old fitness enthusiast's perfect day was interrupted by a serious heart attack. Thanks to Capital Health’s Cardiac Rehabilitation team, he's not only back to his normal routine—he’s be doing it better than ever.