Capital Health Regional Medical Center is proud to be one of only a few hospitals in the nation to provide clinical rotations for the Special Operations Combat Medic Course (SOCM), which trains medics in the U.S. military’s elite armed forces, including U.S. Army Special Forces and Rangers, Navy SEALS, Marine Recon, Civil Affairs, and others. The program provides training in combat trauma management and tactical combat casualty care so medics have the skills and confidence to effectively treat multi-system trauma patients who are combat wounded in austere environments. The SOCM is expected to maintain these critical patients for up to 72 hours prior to evacuation. Training covers the entire continuum of care, starting at the point of injury until evacuation to a surgical facility.

During these rotations, students work closely with Capital Health staff to learn about hospital systems and best practices and perform procedures that fall within the scope of SOCM practice. Upon completion of the course, SOCM students are certified by the National Registry of Emergency Medical Technicians and qualified in Basic Life Support, Pediatric Education for Pre-Hospital Providers, and Advanced Cardiac Life Support.

Graduates of the SOCM program are the finest combat first response/trauma medical technicians in the world. However, when they are deployed in underserved areas around the world, they are also often asked to provide more general medical care for local civilians who have never seen a medical professional. In addition to the training they receive at Capital Health Regional Medical Center, SOCM students receive training at Fort Bragg, NC to acquire a working knowledge of dentistry, optometry, veterinary care, preventive medicine and water quality/sanitation in order to better serve their teammates and foreign national counterparts in regions where health care facilities are nonexistent. 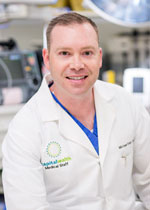 He received his medical degree from New York College of Osteopathic Medicine. He completed his surgical internship and general surgery residency at Philadelphia College of Osteopathic Medicine, serving as chief resident during his final year of training. Dr. Kelly has been actively involved in research projects throughout his training and has given several lectures on various topics in trauma surgery and military medicine. After graduating medical school in 2006, Dr. Kelly joined the United States Army Reserve Medical Corps and has since achieved the rank of Major. He has served overseas, with combat deployments to the Middle East and Afghanistan. He has cared for injured soldiers in Combat Support Hospitals and as part of a Forward Surgical Team, performing life-saving surgical interventions in the most austere environments. Major Kelly has received multiple military awards including the Army Commendation Medal (2nd award), Afghanistan Campaign Medal, and the NATO Service Medal. As a surgeon with the 912th Forward Surgical Team, Major Kelly received the Army Valorous Unit Medal for heroism in support of Operation Freedom’s Sentinel. Dr. Kelly was also the 2015 recipient of the Dr. Martin Epstein Award for Humanitarian Service.

SFC Terry completed his training for the United States Army Special Forces (Green Berets) in 2006, after which he was assigned to Fort Bragg, NC as medical support/cadre. He later deployed to Iraq for Medical Proficiency Training (MPT) at the Air Force Theater Medical Treatment Facility. He is an advanced tactical paramedic (ATP) with certifications in advanced cardiovascular life support, EMT, pre-hospital trauma life support and advanced life support/PEPP.

Dr. Sylvia Bolock, board certified in family medicine, is now seeing patients at Capital Health Primary Care - Ewing, a growing primary care practice in Mercer County. Fluent in English and Spanish, Dr. Bolock is experienced in providing care for adolescents (ages 16 and up), adults, and seniors.

To help bridge the gap from acute care to the varied levels of care outside the hospital, Capital Health has launched a new Post-Acute Care Program that is part of Capital Health Medical Group.

Capital Health Primary Care – Lawrenceville, part of Capital Health Medical Group and a trusted provider of primary care in eastern Mercer County, moved to a new office at The Atrium, located at 133 Franklin Corner Road, Lawrenceville, NJ 08648. The office was previously located in the office building next to its new location.