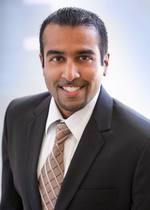 Dr. Mark Saxena is a fellowship trained gastroenterologist, specializing in the diagnosis and treatment of general diseases of the digestive system. He received his medical degree from Howard University College of Medicine in Washington, DC followed by internal medicine residency at UMDNJ-Robert Wood Johnson Medical School and chief residency at St. Peter’s University Hospital, both in New Brunswick, NJ.

He completed his fellowship training in gastroenterology, including chief fellow, at Rutgers-Robert Wood Johnson Medical School, where he also served as an assistant professor of medicine in the Department of Medicine’s Division of Gastroenterology prior to joining Capital Health. Dr. Saxena was awarded both the Best Teaching Resident and Best Teaching Fellow recognitions during his training.

Dr. Saxena is board certified in internal medicine and gastroenterology by the American Board of Internal Medicine. He has presented his research at national conferences, including multiple times at annual meetings of the American College of Gastroenterology and the American Gastroenterologic Association, and he has been published in medical journals on topics such as early detection of upper GI cancer and inflammatory bowel disease.

Click here to schedule an online appointment with Dr. Saxena.