Rediscovering Her Identity (and the Joy of Shopping at Old Navy) 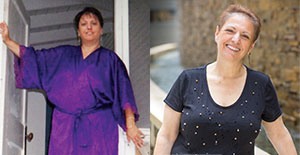 Talk to Stephanie Bongiorno of Lambertville, NJ and you may use words like enthusiastic, gregarious, and self-aware to describe her. But at the very bottom, when she hit her lowest low during her struggle with her weight, she describes herself as apologetic for everything; exhausted; and at one point, suicidal.

Age 12. That’s when weight started to become part of Stephanie’s consciousness. Spurred by her father moving out, Stephanie quickly began to use food and her ensuing weight gain as a way to retain some sense of control in her life.

“I couldn’t control him leaving and I couldn’t keep him home, so this was something I could control,” she says.

Her weight gain embarrassed her father and her journey through diets and diet doctors began. But the gaining continued, and she and her sister started to joke about who could gain the most weight.

By the time Stephanie got married for the first time, she reached 200 pounds. While her husband didn’t care about her weight gain, he did worry about her health. For Stephanie, it was a slow spiral toward losing her identity.

It was her lack of identity and her highest weight of 270 pounds, which ultimately became her turning point.

That pivotal moment came when she decided that she was going to try to take back control of her life.

“I was a confident, bubbly person who didn’t take crap from anyone and I was losing that,” she says. “I apologized for things and I took ownership of everything bad that happened. Everything became about my weight. It was who I was.”

At that point, she knew she had to “get it off her,” both the weight and the burden of knowing she was losing sight of who she was.

“I was doing everything for everyone else. It was time to take myself back.”

Having already exhausted every imaginable diet and failing at integrating a meaningful exercise routine, she turned to a surgeon for help.

But the surgery led to health problems. It was at that point that she found Dr. Jooyeun Chung, the only surgeon Stephanie could find who would go back in and correct the initial surgery.

“When I met Dr. Chung, I remember thinking she was a woman who was no holds barred and would say what she needed to say. I completely trusted her right then and there, and said I’m ready to do it. I didn’t even have to go home and think about it,” Stephanie says. “I remember thinking at that first meeting with her ‘this woman cares AND she knows what she’s doing.’”

Dr. Chung did gastric bypass surgery on Stephanie and it was finally the game changer she needed. Now 160 pounds, Stephanie says her confidence in Dr. Chung was immediate and that it was a partnership every step of the way.

“When I first met the psychiatrist who was doing my evaluation before I could have the surgery, he told me, ‘Dr. Chung’s going to be right on you because she cares.’ “

“I’m more devoted this time because Dr. Chung is so devoted. You also don’t want to disappoint her,” Stephanie says. “I gave her everything and I turned myself over to her. I don’t always do that.”

“This is a tool. It’s not a cure,” she continues. “But for me it’s been life changing.”

“I’m brighter and lighter. I talk to more people. I make more friends. I’m back to who I was, and I stand up for myself again,” she says with a laugh. “I’m also shopping in Old Navy and that’s awesome too.”

If you would like to learn more about weight loss surgery at the Capital Health Metabolic and Weight Loss Center, sign up for one of our free information sessions led by Medical Director Dr. Jooyeun Chung. Sign up online at capitalhealth.org/weightloss or call 609-537-6777.