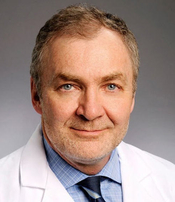 Dr. Curran is the first radiation oncologist to serve as the director of a National Cancer Institute-designated cancer center. He is the only individual currently serving as director of an NCI-designated cancer center and as group chairman of an NCI-supported cancer network group. He was also named a Georgia Research Alliance Eminent Scholar and Chair in Cancer Research in 2013 and is a Fellow and Gold Medal Recipient (2016) in the American College of Radiology. Dr. Curran serves on many advisory committees of comprehensive cancer centers as well as committees for developing cancer centers.  He was ranked among the top 10 principal investigators in terms of overall NCI funding in 2013 and among the leading 20 investigators in terms of overall NIH funding as principal investigator in 2013. Dr. Curran has led several landmark clinical and translational trials in the areas of lung cancer and malignant brain tumors and is responsible for defining a universally adopted staging system for patients with malignant glioma.

Dr. Curran graduated with honors from Dartmouth College, received his medical degree from the Medical College of Georgia, and is a board certified radiation oncologist. Curran completed his residency in the Department of Radiation Therapy at the University of Pennsylvania Medical Center and his internship in internal medicine at Presbyterian University of Pennsylvania Medical Center in Philadelphia. Before joining Emory, Dr. Curran was professor and chairman of Radiation Oncology at Thomas Jefferson University in Philadelphia and clinical director of Jefferson's Kimmel Cancer Center.
Dr. Curran has authored or co-authored more than 700 abstracts and scholarly papers. He has been chairman or co-chairman of more than 40 clinical trials and a reviewer for 12 national/international journals.

As part of its commitment to providing leading-edge care, Capital Health has announced the launch of its comprehensive, state-of-the-art Lung Center located at Capital Health Medical Center — Hopewell.  The program is designed to address the need for integrated, comprehensive lung services in the region.