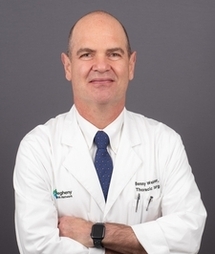 Dr. Benny Weksler graduated from the medical school of the Federal University of Rio de Janeiro, Brazil and proceeded to train in general surgery at the New York Medical College Program in New York. Following the first three years of his residency, he spent two years at Memorial Sloan-Kettering Cancer Center as a research fellow. Dr. Weksler went on to complete his surgical residency and then returned to Memorial Sloan-Kettering Cancer Center as a fellow in the Thoracic Surgery in the combined New York Hospital Cornell Medical Center/Memorial Sloan-Kettering Program. He continued his training with a one year minimally invasive fellowship at the University of Pittsburgh Medical Center. In 2001, Dr. Weksler completed his MBA.

Dr. Weksler is a renowned minimally invasive thoracic and esophageal surgeon and has made numerous presentations at national and International society meetings. He has been part of the National Comprehensive Cancer Center panel on both esophageal cancer and smoking cessation. Dr. Weksler is also part of the editorial board of the most important journals in thoracic surgery, including the Journal of Thoracic and Cardiovascular Surgery, Annals of Thoracic Surgery, and Innovations. Dr. Weksler is a member in many societies including the American Association for Thoracic Surgery, the Society of Thoracic Surgeons, the International Association for the Study of Lung Cancer, and the International Society of Minimally Invasive Cardiothoracic Surgery, among others. Dr. Weksler’s interests include esophageal cancer, lung cancer, thymomas, diseases of the chest wall, minimally invasive and robotic surgery, and surgical endoscopy. He has published many manuscripts in multiple journals in his areas of interest. Dr. Weksler’s research interests include smoking cessation in surgical patients, novel approaches to esophageal cancer treatment, and immunotherapy in the treatment of lung cancer.